Being a UK Bingo provider, it’s somewhat difficult to translate to our newer players the plethora of online slot games that are on offer here at Crown Bingo, but trust us, there’s an abundance! Despite being one of the top bingo sites on the web, we continuously source some of the best online slot games to be devoured by our players and we’ve got a range of different themed slot games for you to enjoy. Today we shall be discussing the Norse inspired North Storm slot game that has grown tremendously in popularity in recent years. Escorted through the cold mountains of the north battling the Vikings for the grand prize, players will stumble across the fantastic bonus features alongside the engaging bonus rounds that are there to be triggered.

Developed by Austrian powerhouse Rabcat Gaming, the 5 reel slot has 25 paylines with an abundance of bonus features that can result in a tremendous amount of Free Spins alongside a truly gargantuan multiplier. Not only can players benefit from these bonus rounds but they can also land Bonus Falls and Wolf Wilds. Betting in the game is fixed at £0.25 to £50 per line thus accommodating for all types of slots players that may want to delve into the Norse inspired slot. With so many bonus features and fairly easy to follow game function, North Storm slot has the capacity to be spoken about in the same breath as mobile slot game hits such as Rainbow Riches and the astronomical Starburst slot. 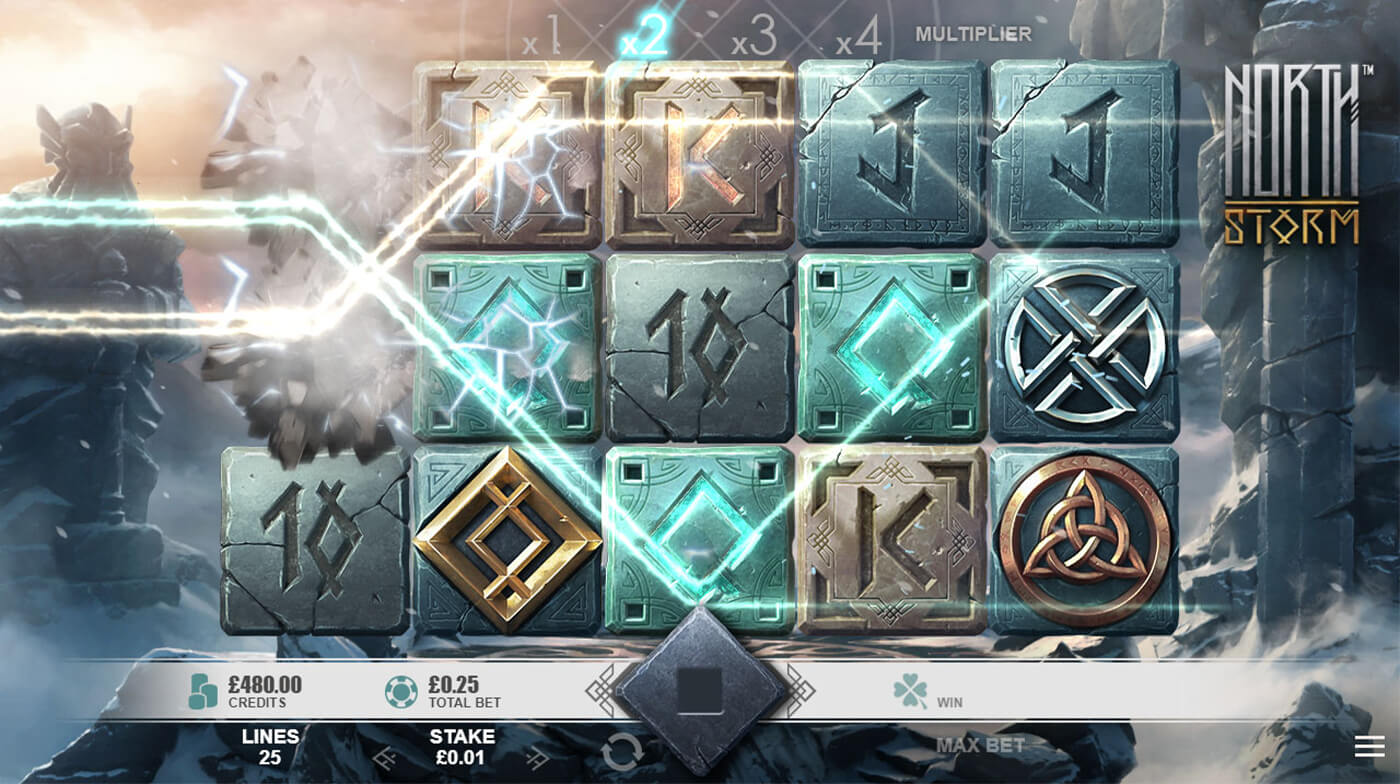 One of the many slot bonus features, the Free Spins round can be triggered by 3 or more Viking Head Free Spins symbols on the reels across a payline. For the first time this happens, players will be rewarded with an initial 8 Free Spins, and if the Viking Head symbol lands on further paylines during this round, players will gain an additional 2 Free Spins.

Similar to the cascading reels we see in Megaways slots and even some Jackpot King slots, land a winning combination to watch the reels disappear and be replaced with a new set of symbols. These new symbols that drop down to replace those that have vanished can create new winning combinations, ultimately accumulating a potentially greater jackpot.

Rabcat Gaming have most certainly ticked many of the boxes for what makes such a great casino slot game with a fantastic user interface coupled with some potentially huge jackpots. It’s fair to say that the North Storm slot possesses the action packed and immersive play that so many slot players desire. If you’re looking for games that entail similar sort of bonus rounds, we recommend trying out some Megaways slots, including Fishin’ Frenzy Megaways or Rainbow Riches Megaways.